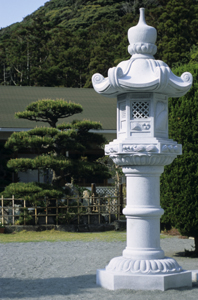 No matter how much research I do, the people I meet during my travels usually find a way to surprise me. Those brief encounters, sometimes saddening, sometimes amusing, always teach me something new about their lives and their cultures; and sometimes about myself.
My trip to Niijima– one of the Izu Seven Islands in Tokyo prefecture in April 2006 was to be no different.
I took the morning ferry from Takeshiba Pier and arrived at my minshuku – a traditional Japanese inn just before midday. I was greeted by a smiling lady who bowed some ten or twenty times before she handed me a pair of slippers. I knew I was in a traditional Japanese house.
I dropped my backpack in my room and started looking for the bathroom. To my surprise all I found were toilets but no bath or shower. “That’s impossible; this is a hotel,” I thought. Desperate to discover where the bathroom was, but too embarrassed to ask, I spent the afternoon standing by my bedroom door and pretending I was just about to walk in so I could watch what other guests were doing. In the early evening they all started leaving. They reappeared at dinner time all wearing yukata – a casual form of kimono that is often worn after bathing. I realised what they had been up to. The Izu Islands are located inside a volcanic belt and famous for their onsen - hot spring baths. So, it being a budget minshuku there simply was no bathroom; the guests were supposed to go out and get soaked in the hot waters of one of the many onsen.
Every evening saw the same ritual. All guests would leave and then come back wearing robes. Then the owner of the house would come upstairs and shout “gohan!” (dinner).
“Gohan” was a problem for me. When I travel I am not very fussy about things; I will happily sleep on the floor, walk for miles or travel at the back of a chicken van. I do not complain if the weather is freezing cold or boiling hot. But I have a confession to make – I am not so easy going when it comes to food. I will eat most things but there are a few exceptions and the boundary is very clear – edible on one side, inedible on the other. And one more thing – I know it is supposed to be healthy and I know everyone else loves it, but I am not a great fan of seafood. There are many dishes in Japanese cuisine that I count among my favourites and contrary to popular belief it is not all about seafood. Not so in Niijima though; the Izu Islands are renowned for and proud of their fresh fruits de la mer (excuse my French).
So imagine me, a seafood-hater, being served raw fish, seaweeds and prawns every evening. Leaving anything on the plate or, indeed, not turning up to dinner would have been considered very impolite so I knew I had to be brave.
And I was, until the last day. On the last evening the owner’s wife put a tray in front of me and said with a smile: “you like raw egg.” I was not sure whether it was a question or a statement. Whichever it was, it sounded ominous to me.
Call me a culinary xenophobe, but I will not eat a raw egg. The very thought of it makes me queasy. “That’s just my luck,” I thought. For five days I had been forcing myself to eat raw fish with a smile on my face. And after all that sacrifice, in the middle of a tray full of food prepared for me by my hostess was that damned raw egg waiting there to be rejected and hurt her feelings.
In despair I decided that the only way to avoid that was to hide the egg and deal with it later. Guests kept coming in and leaving and I was sitting there eating very slowly. Finally I was left on my own. I grabbed the egg and placed it quickly but carefully in my jumper pocket.
I went for a long walk that evening. I found a bin far away from the hotel, had a look around to make sure I was not watched and disposed of the egg feeling a mixture of guilt and relief.
Next morning I got a lift to the harbour. The ferry arrived on time and passengers started checking in. I showed my ticket to the uniformed man. His face took on a serious look. He said something to the harbour workers standing beside him and they all started talking loud and pointing at me. All of a sudden one of them turned towards me, snatched my ticket, jumped into a tiny van and drove off.
I was standing there speechless. I did not have a ticket, my ferry was due to depart and all the other passengers had been checked in. Timetables are religiously adhered to in Japan. All I could think of, in panic, was that I had to be in Tokyo airport the next morning. I was flying back to London and I just could not afford to miss that flight.
After what felt like eternity the little van was back and the man handed my ticket back to me pointing at a fresh stamp. All became clear. I was supposed to get it stamped in the ticket office. Instead I went straight to the point of departure. I had not read the instructions on the ticket. There was no point – I would not have understood a word.
Feeling terribly self-conscious (there was a ferry full of people, already 20 minutes late, waiting for me only because I had not followed the right procedures) I presented my ticket to the uniformed man again. He nodded his head and bowed as if nothing had happened.
“Gomen nasai (I’m sorry),” I said.
“Is ok,” he replied with a broad smile.

Published on the Travel Photographer of the Year website November 2007