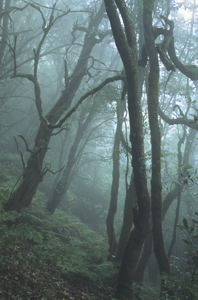 In the middle of the British winter in 2004 I wanted to go and shoot somewhere warm and sunny but safe and comfortable at the same time. It had to be the Canary Islands; I had always wanted to see La Gomera with its unspoilt tourist-free beauty.
I did not spend much time preparing for the trip. “It’s just the Canary Islands,” I thought. “A casual holiday.” I booked a flight and a modest room in the village of Hermigua in northern La Gomera, and then bought a small guidebook with a view to reading it during the four hour flight.
The day had come and the much awaited holiday started. When I was sitting comfortably on the plane I opened the book on the chapter “Northern La Gomera” and started reading with growing disbelief: “Atlantic trade winds bring clouds and misty rain to Northern La Gomera…” Hmmm. That was a bit unexpected. Rain??? It was the last problem I thought I would have to deal with. It was supposed to be the Canary Islands – constant sunshine and blue skies! Then I recalled little snippets of information I had heard about La Gomera… lush greens, a fertile island where bananas grow in large quantities, 400 species of flora, more palms than on all other islands taken together… It dawned on me that for a place to be that green it must receive more than the average amount of precipitation. “Well,” I thought to myself, “all is not lost. After all, this is a shooting trip and rain means photogenic skies and dramatic sunsets.”
Needless to say it rained all the time and dramatic light never materialised. It was always dark, grey and, above all, damp. But I did not really feel that disappointed. The trip turned into a lazy and relaxing holiday. Walks along the coast with an umbrella, cups of tea in the local café and reading a Bill Bryson book – nothing you cannot do back home but nice anyway.
The only problem was the choice of footwear I took with me. Not knowing what La Gomera was like I decided to leave my heave-duty (and waterproof) hiking boots at home and took a pair of old light ones instead. I expected I would be wearing sandals most of the time (I was going to the Canary Islands after all) and would need the boots just once to get to the top of the island’s highest mountain – Alto de Garajonay. At a height of 1487 metres above sea level, it did not sound like a lot of an adventure but the old boots were well worn out so I ended up with wet feet every day.
On the last day the weather changed at last. It suddenly became dry and the leaden skies gave way to white fluffy clouds. Every minute it was looking brighter and more promising. I packed my camera gear and left looking forward to a long hike and photography.
It was a very pleasant walk indeed until I reached the top of Alto de Garajonay. That was when the heavens opened and let out the heaviest rain I had ever seen in my life. Ten minutes later the path had turned into a stream full of slippery mud. It never stopped pouring down until the next morning.
I got to the hotel soaked and covered with red mud with my boots full of water. The next day I was travelling back to London, on two buses, a ferry and an aeroplane and come hell or high water (no pun intended) I needed a pair of dry boots. Fortunately the room had cooking facilities. I took the boots off, carefully placed them on top of the cooker close to the gas ring and turned it on. The chances were I would have dry boots to wear the next morning if I kept them there overnight. It was not to be the end of my misfortunes though; in an hour or so the flame suddenly disappeared. I immediately knew what happened; I had run out of gas; it was not the first evening I had used the cooker to dry my clothes.

The last thing I wanted to do was to go to the reception desk and ask for more gas. What was I supposed to say? “Hi there, I’ve just used half a year’s supply of gas in five days ‘cos I was drying my boots on your cooker. Give us another bottle, please…”
I looked around the room and found one last potential source of heat – two very powerful light bulbs attached to the wall above the mirror in the bathroom. Great! I tied the boots to the lamps, one each, with shoelaces. Very proud of myself and my ingenuity, I went back to the room, lied on the bed (just for a minute) and immediately fell asleep.
I woke up a few hours later and got up to check how the boots were doing. The bathroom smelled of smoke. My clever plan worked rather too well – the boots were dry but they had also shrunk and one of them had a large hole in it. I laid them to rest in the bin and just felt relieved and lucky the whole place had not caught fire.
Did I bring any memorable pictures from that trip? Not really, but I have no regrets. I learned a valuable lesson (and I learned it cheap) that saved me a lot of unpleasant surprises during many trips that followed. I realised how important it was to travel prepared. A bit of research on the Internet or reading a guidebook before the trip instead of after take-off can prevent your holiday from turning into a disaster.
And, of course, you must always remember to take a spare pair of shoes.
All’s well that ends well. The next day I travelled to Tenerife and flew back to the UK. The only tricky bit was getting from Heathrow airport to South London without boots. It was a freezing February evening with biting wind and falling sleet. And for the first time during my trip to the Canary Islands I was wearing sandals…

Published on the Travel Photographer of the Year website August 2007